Our journey to parenthood has been a faithful one and we'd like to begin by saying that our God is always good and never makes mistakes. We were blessed with our first miracle in 2013, after an uneventful and joyous pregnancy. Our first son, too eager to join us, decided that he just could not wait to meet this world and made his unexpected arrival six weeks early. With his premature delivery came complications which left us with the news that conceiving again would be nearly impossible. As we always have done, we turned our questions and our hopes to the Lord for direction. After numerous corrective surgeries to repair the damage and much fervent prayer, we gave our hearts to the idea of adoption. With so much happiness and excitement, we tip-toed into the process. As God would have it, that very same week, He revealed His perfect timing and we learned that we were pregnant again with our second miracle, whom we would soon come to know as "jellybean."

If there ever was a child who was so wanted and prayed for by so many, it was our sweet little jellybean. From the beginning, we learned that we were on a roller coaster speeding out of control with more unexpected twists and turns than we could have ever anticipated. Our first few weeks came with the advice to be "cautiously optimistic." Jellybean's earlier ultrasounds revealed levels and heartbeats which were not as strong as they could be. We were determined to be as faithful as possible and to find peace in knowing that God was going to do what He felt was best for this little life - and for ours. Thankfully, our blessing was allowed to grow; weeks turned into months and months turned into trimesters and this baby, who had already defied so many medical odds, was alive and thriving.

Navigating a "high-risk" pregnancy was one of the scariest blessings we would ever come to know. We faced hundreds of appointments, ultrasounds, nightly abdominal injections (to ward off blood clotting complications that cause miscarriage or stillbirth), trips to the pharmacy and thousands of miles driven and dollars spent. We battled countless attempts to find the courage to buy the crib we were dreaming of and ignore the idea that our nursery might remain empty. God had already shown us over and over that He was in control and that is where we found our peace. Eventually we were brave enough to get our very special crib, and we even decorated the nursery using beautifully framed prints of actual prayers sent by those we know (and some people we'd never even met!) who were casting blessings of health and safety over our new baby. It was our hope that the prayers which once helped to grow our baby in the womb,

would continue to help grow our child in this world.

God gave us a mission by asking us to walk this type of pregnancy journey and we believed it was to make His Word known through each chapter of our baby's story. So that is exactly what we did! We shared our faith with every nurse, tech, pharmacist, insurance representative and anyone else who would listen! Jellybean faced and overcame so many obstacles; many appointments were met with doctors who fell silent, questioning the newest concerns presenting at each scan. There was always something new to be worried about and with each new question came devastating fear and even more reason to turn to the Lord for strength. We met with specialists and surgeons from many fields who studied our baby and determined that jellybean's conditions (primarily, esophageal atresia), though abnormal, were not life threatening and could be treated with surgery after birth. We were given hope, guidance, and a plan.

As the weeks progressed, jellybean threatened to come early many times and preventative measures were taken to ensure that our little one had the chance to grow as long as possible. Hospital stays were frequent and doctor appointments became daily. We were determined to do anything and everything possible to give our child a fighting chance. Sonograms revealed that severe Polyhydramninos (caused by jellybean's inability to swallow amniotic fluid) would eventually result in labor which could not be stopped - and so we waited. After spending eight weeks managing contractions which were coming every few minutes, it was time and we were having a baby! We'd made it to 34 weeks which exceeded anyone's expectations. With God's help, we had done the very best we could and it was finally time to enjoy the excitement and meet this child who was so fearfully and wonderfully made.

On February 25, 2016, at 3:43 am, after a long and intense day and night of labor resulting in an emergency c-section, jellybean was born! While we waited to learn if we'd had a boy or girl, it was then that we saw him: Christian Michael Hernandez, 4 pounds, 4 ounces and 19.5 inches of pure miracle. He was perfect and pink and everything we hoped and prayed for. The NICU team who was on standby were treating him and all was going according to plan- until all of the sudden...it wasn't. Seconds turned into minutes, and our baby boy never made a sound. Every single hero in the room with us worked as hard as they possibly could to save him, but it was determined that Christian's trachea was not attached to his lungs and he was unable to receive oxygen. This was not visible on ultrasound and nothing we could have planned for. There was nothing that could be done, and in this moment, we were given the chance to hold our son and tell him how much we loved him and how very much we wanted him. We told him that he was everything we could have dreamed of. As his heartbeat began to weaken, it was our voices he heard last and the face of Jesus he saw first. We knew, right there in the operating room, with our son in our arms, that this was our final mission with Christian on Earth. In these moments, instead of screams of anger and hurt, we chose to profess unconditional faithfulness in our Lord and Savior and testify out loud, for all those who could hear us, that our God is always good, no matter what He was asking us to endure.

Despite facing the worst possible pain a parent can be asked to survive, we knew immediately that though Christian's life was small, it was so very mighty. His death would not be in vain. Christian had the opportunity to impact hundreds of lives along his journey to birth and continues to do so still. In the days following Christian's passing, we were told that his story, and our decision to continue to praise God despite our suffering, was a "light in this world." We knew then that our mission and God's purpose for our son had become greater than we ever expected. While his nursery did end up remaining empty, our lives gained a full and worthy purpose. Through Christian Michael Hernandez Foundation, and its Be the Light Project, we vow to honor our Lord and preserve our son's memory by being a light unto others through

the provision of love and kindness. Until the day when Jesus places our sweet baby back into our arms forever,

it is our dream to use this life we've been asked to live to bless others and maybe in doing so,

we will make sure that our precious little boy will never be forgotten.

Rest in Paradise, little one. 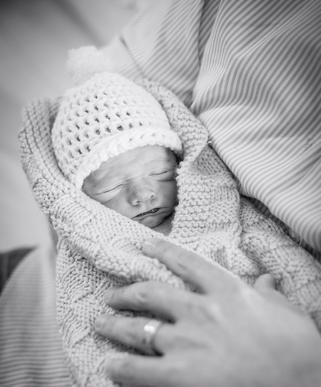